Concerns are growing over the intensive farming of this nut, which is causing land degradation and pollution and putting biodiversity at risk.

Translated from the Italian by Giusy Fazzina

The hazelnut is one of the most typical nuts in Italy. It is harvested in Autumn, and Italy, together with Turkey, accounts for 80 per cent of global production. The past few years have seen an increased appetite for this nut in the confectionery industry, where it is widely. According to projections for this industry, a 30 per cent increase in production is expected by 2025 thanks to the creation of 20,000 hectares of new orchards. This forecast has generated significant concern, and intervention has been called for, by both individuals and groups of small farmers in several areas of the country, particularly in the three regions with the highest hazelnut production levels: Piedmont, Campania and Lazio. These fears have been confirmed by Fabio Scarfò, a forester and member of LIPU Trevigiano Romano, who has been following developments in the hazelnut industry around Lake Vico in the province of Viterbo. 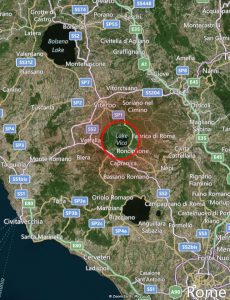 Fabio, as a forester and a LIPU volunteer you have been fighting for years to safeguard this area. What changes have you noticed in the past few years?

I was born and raised around Viterbo, north of Rome, where I always appreciated the variety of our landscape and where I first became interested in birds, nature and biodiversity, before it became my job as well as my passion. The hazelnut, a typical nut of this area, especially around Lake Vico, has always been grown at the family level. More intensive production, however, started 40 years ago and has increased – particularly over the past decade – due to regional economic incentives, which are in fact creating an intensive monoculture.

Are there any laws that could slow down this expansion?

No. There are actually no restrictions or standards that can prevent anything from being grown on any piece of land, not even if you switch from arable land to forest land. In the past few years, another measure that has been removed is the obligation to request an authorisation for protected areas, and as hazelnut crops do not have a structure, an impact assessment is not required either for Nature 2000 sites. Unfortunately, we have lacked proper planning at the territorial level and a general assessment of the effects that these changes have produced.

What have the consequences been for the landscape?

The landscape has been simplified and natural vegetation has disappeared. Creating hazel groves requires the removal of all the natural elements of the landscape. The old mosaic of arable land, which used no water, has now been replaced by rows of hazel trees along with kilometres of drip irrigation pipes. The land here is often kept bare to facilitate mechanical harvesting. Additionally, the absence of grass causes run-offs, thus releasing CO2 into the atmosphere. Mechanical measures are widely used, but even more popular – especially for industrial crops – are herbicides, notably glyphosate. Weeding is often extended to land boundaries and to adjacent areas, preventing wild species from growing. On top of this, insecticides are also employed, and their use is justified by the increase in production levels and the industry’s demand for the ‘perfect’ product.

What about changes in the productive fabric?

The small, family run businesses have now been replaced by a concentration of plots of land owned by bigger companies, whose sole objective is to grow hazelnuts and maximise profits.

I assume that Lake Vico has also been affected

In the last 30 years, we have witnessed a rapid transformation of this oligotrophic (that is, poor in nutrients) lake into an eutrophic one, with the subsequent alteration of the fauna and flora of the basin. These changes are due to additional nutrients, which are largely the result of farming, where phosphate-based fertilisers and weedkillers are used in massive quantities, in turn producing toxic algae that compromise the hydro-potable use of these waters. In the past few years, the farmers themselves have been collaborating to reduce the amount of nutrients that end up in the lake, but these good practices are yet to be adopted by their colleagues working in other hazelnut areas.

Which bird species are hosted in the local hazel groves?

Red-backed Shrikes and Hoopoes could be found up until the 1980s, but nowadays only a few species are left, mainly from the Fringillidae (true finch) family. I need to walk for a long time before I can spot species that were once so common, like the Little Owl, and this makes me so sad but also so angry, which is why I fight alongside LIPU to safeguard biodiversity in my province and in the entire country.

A CAP Based on ‘Agroecology’

LIPU, along with BirdLife, is asking that the regulations of the next Common Agricultural Policy should include the obligation to leave 10 per cent of all cropland, including that of permanent crops, for natural spaces such as hedges, natural vegetation and puddles. It is also demanding more economic support for farmers during this transition from an intensive, single-crop model to one based on the principles of agroecology.