The charm of this lake, situated only about 8 kilometres from the sea, is that it is entirely surrounded by cultivated land, almost an oasis in the desert. It benefits from its strategic position on migration routes which follow the coastline, and over 150 species of birds visit it during the course of the year. Lake Santa Luce was created as a reservoir in the early 60’s and now looks completely natural; as marsh vegetation became firmly established, numerous species of aquatic birds soon arrived. There is a general lack of areas of open water in the region and therefore the lake has quickly become very important as a natural haven, a resting place for birds during the migration period, as well as a suitable habitat for the multitude of organisms which have become well established in recent years. Surrounded by bare cultivated hills, it sparkles like a jewel within a frame of luxuriant greenery, formed by copses of willow, tamarisk, locust-trees and elm. In many places there are dense brambles, blackthorn, dogwood and hawthorn, which in spring become a spectacle of rare beauty. Marsh plants have also pushed outwards from the banks to form further areas of typical wetland vegetation, here and there broken up by colourful water lilies. 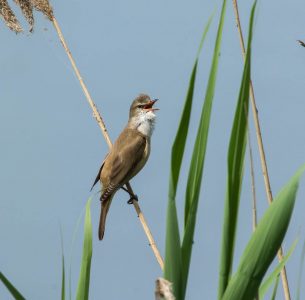 Large numbers of willows attract Night Herons and Little Egrets during migration and in spring provide suitable sites for the characteristic bottle-shaped nests of Penduline Tits. Dense reed-beds close to shallow water shelter nests of Purple Heron, Little Bittern and Little Grebe low down, and Great Reed Warbler and Reed Warbler higher up on the stems. In spring Marsh Harriers circle around on the hunt for Coot and Moorhen. In winter the open water of the lake is populated by Pochard and Teal and is used by flocks of cormorants, fishing for carp and tench. In summer the reed-beds shelter small noisy migrants like Reed Warblers and Great Reed Warblers, while Penduline Tits work swiftly at their nests. But the most spectacular season is undoubtedly spring: the flower covered hills become a backdrop to the mating rituals of Great Crested Grebe, not just by chance the symbol of the Reserve and whose population is, happily, on the increase, and the spectacular fishing techniques of several pairs of Ospreys.

A classroom in the countryside

Santa Luce Reserve has a visitor centre which is specially equipped for teaching purposes. Information materials, audio-visual aids, binoculars, microscopes and survey forms are available to enable all sorts of research on environmental themes. Teaching staff at the Reserve are available to guide and help school groups to appreciate the natural marvels of this ecosystem. A special path, with two observation hides, is the first stage in an adventure whose aim is to teach how to enjoy oneself. Knowledge of nature is a pre-requisite for its management and protection. Raising awareness in the youngest members of society and providing them with information is perhaps the best investment for the future, and it is here that our efforts and confidence lie.

Santa Luce Reserve is one of the first to be established by collaboration between industry and environmental organisations. LIPU manages the area in agreement with Solvay Italia, the owners of the lake. It is only open to groups by appointment, by telephoning 0586-400226 during office hours. The Reserve is open to the public on Saturdays and Sundays. A specialist guide is available for the whole of the visit. The entrance fee is modest to help LIPU to continue to invest in nature.