Ca’Roman LIPU Reserve is an example of a typical stretch of Venetian shoreline, those ribbons of earth and sand which, from Cavallino to Chioggia, separate the lagoon from the sea. Within the 40 hectares of the reserve there is a combination of habitats, ranging from sandy beach to dunes, and behind them, pine woods. Here, at the undisturbed water’s edge, is one of the last refuges of some species of beetles which are on the verge of extinction. Only a few metres from the sea’s edge the first plants manage to survive, despite the high salinity. Further up the beach are found those plants which help in dune formation, while in the lee of the dunes, protected from the wind, a belt of woodland has developed which includes rare species of trees typical of these shores.

More than 100 resident and migratory species of birds have been observed within the boundaries of the reserve, evidence of the high quality of its biological diversity. Among those which can be seen all year round are Kingfishers, Black-headed Gulls and Herring Gulls, while summer visitors include Cuckoos, Golden Orioles, Nightjars and Cirl Buntings. In winter Peregrine Falcons and Sparrowhawks are on the hunt for small birds which shelter in the stone work of the sea wall. The importance of the reserve is emphasised by the presence of large colonies of Little Terns and Kentish Plovers which breed here from early April to the middle of July. It is then possible to follow the breeding behaviour of both species which lay their perfectly camouflaged eggs in simple hollows scraped in the sand. It is vitally important for visitors to the reserve and holiday makers to be careful to avoid trampling the eggs or disturbing, even unintentionally, the sitting adults. The Kentish Plover is a small wader which feeds on insects which it catches as it runs along the water’s edge. At Ca’Roman there are some 40 to 80 pairs, out of an Italian population of 2000 – 3000. Little Terns are similar in coloration to gulls but are more elegant in shape and behaviour. They feed on small fish which they catch by skilful diving. The Italian breeding population is about 3000 pairs, of which there are some 100-120 pairs at Ca’Roman. 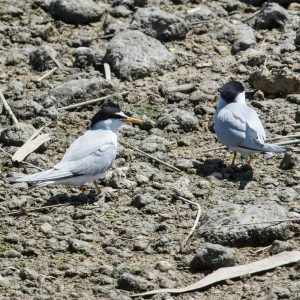 Shoreline litter is a rich source of food for a large number of organisms, including tiny crustaceans and many insects. On the beach can be found the shells of several molluscs typical of the upper Adriatic. On the bare sandy beach there are very active beetles, able to jump, run and take short flights. Scarab beetles are typical of the dune habitat and elsewhere in the reserve are other species which are localised along the Venetian coast and in danger of extinction due to mechanical beach cleaning operations.

Ca’Roman Reserve has been established by the collaboration of the Local Authority Department of Ecology of the Commune of Venice and LIPU.

The reserve is open all year with guided visits available from May to August.