The Bosco Negri LIPU reserve is in the Lombardy Plain and was bequeathed to the Commune of Pavia in 1968 by Guiseppe Negri, a great nature enthusiast. The Commune has entrusted its management to LIPU. Bosco Negri is an excellent example of the vegetation which once covered most of the Lombardy Plain in pre-Roman times. At higher altitudes the dominant tree is English oak, a species which can grow to a considerable height. Hawthorn and Cherry are common, with their spectacular and highly perfumed blossom at the beginning of spring, and at grass level one can find superb wood anemones and lilies of the valley.

For many creatures an area like Bosco Negri is an ideal island in an expanse of cultivated land and urban sprawl. The rich vegetation provides refuge, food and an opportunity to breed for species which would not adapt to a less natural environment. The wildlife of this nature reserve has been studied for decades by researchers from the University of Pavia. Birds are particularly abundant and many species are present throughout the year. There are four breeding species of woodpecker: Greater Spotted is very common; there is one very noisy and distinctive pair of Green Woodpeckers; there are Wrynecks, which migrate to warmer climes in winter; and there is the Lesser Spotted, a real gem, because of its rarity in Italy. Tawny Owls are common, but Bosco Negri reserve is also a good place to observe diurnal raptors: in summer it is easy to observe Hobbys which take over old Hooded Crow nests, while Common Buzzards and Sparrowhawks overwinter here. Kingfishers nesting in the middle of woodland is an ornithological curiosity; they scrape their nests into banks of soil retained by the roots of large trees which have been toppled by the wind. 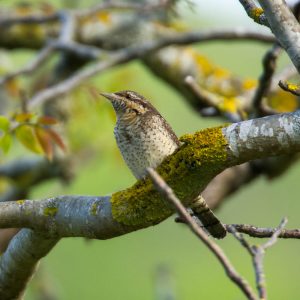 Birds share the natural environment of Bosco Negri with many other kinds of animals which have found here a real island of peace. Many species of amphibians, some endemic, can be observed within the reserve. Although there are also many mammals, they are not easily observed due to their nocturnal habits but to a keen eye, their tracks, remains of meals, droppings and burrows are indications of their presence. The list is long but it is worth mentioning five carnivorous species of the Bosco Negri, fox, badger, weasel, polecat and stone marten, as well as the dormouse, water vole and various species of bats.

Close to the city of Pavia, these 34 hectares are the last real evidence of the enormous forests which once covered the Lombardy Plain. Bosco Negri Reserve is managed by LIPU in collaboration with the Commune of Pavia.

The reserve is open all year on Saturdays, Sundays and Public Holidays. Opening times: 9 – 13 and 15 – 19.
The reserve may be closed in winter in bad weather.