A very large operation code-named ‘Peregrinus’ was implemented in the last few days in many locations across the whole of Italy. The Prosecutor office of Enna (Sicily) led the investigations and the searches were coordinated by the Carabinieri Forestali, Cites Unit of Catania (Sicily) and by SOARDA (the national unit for special IKB Operation) and implemented in various locations in the provinces of Catania, Ragusa and Caltanissetta (Sicily), Alessandria (Piedmont), Rome (Latium), Grosseto (Tuscany) and Trento (Trentino Alto-Adige). The searches involved over 40 Carabinieri agents belonging to the local Cites units.

Technical support was provided by the LIFE Project ConRaSi [Raptor Conservation in Sicily) and ornithologists, some of whom are working for LIPU on IKB projects.

The investigations have discovered a network of nest robbers, buyers of birds of prey chicks and document forgers. The poaching process is well established and tested: the nest robbers identify, locate and follow the breeding pairs of raptors and wait for the hatching of the chicks and a few days later with mountaineering equipment reach the nests and take the chicks and raise them in captivity. In order to sell them they involve expert document and ring forgers, who produce fake CITES documentation and provide the wild caught birds with rings. The fake CITES paperwork and the rings declare that they birds are born in captivity and therefore legally owned. 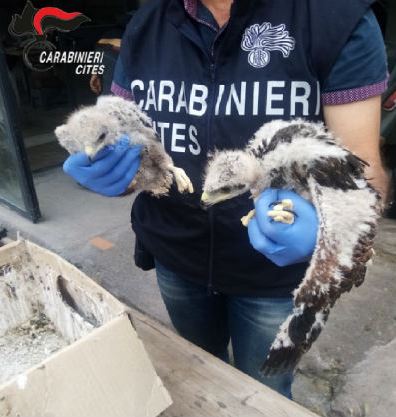 The investigations and searches resulted in 9 people being reported to the authorities and the rescue of many birds including: 8 Peregrine Falcons. 2 Lanner Falcons, one Prairie Falcon, 2 Harris Hawks, 2 Ravens, 1 European Roller, 2 Goldfinches and 30 Starlings. Furthermore, seizures included CITES documentation ready to be forged and computers.

Among the 8 Peregrine Falcons, one belongs to the ‘calidus’ subspecies, which breeds in the Russian tundra although a few winter in Sicily. This subspecies is particular sought after by falconers as it is particularly large and attractive. This indicates that the poachers are also able to trap adults and not only rob nests.

The suspects were charged with aggravated theft, handling of stolen property, mistreatment of animals and forging of official CITES documents. Penalties can reach 2 years in prison and 150,000 Euro fine.

In one search a marijuana field was discovered resulting in the immediate arrest of the suspect.

The text above is a summary and translation of this article: https://www.vivienna.it/2020/06/25/operazione-peregrinus-carabinieri-e-forestale-contro-bracconaggio-e-traffico-rapaci/