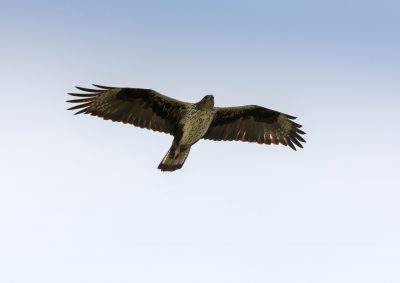 In 2019, three surveillance camps were organized by Gruppo Tutela Rapaci. GTR involves LIPU volunteers, as usual. Surveillance activities are subdivided between different organizations. Throughout the reproduction period, six pairs of eagles were followed in camp 1, two pairs in camp 2 and two pairs in camp 3.

In 2019, a sixth pair was found in the same area where until now five pairs had been watched. Only three eaglets were born from the six monitored pairs were, two pairs unfortunately failed their reproduction, one pair did not reproduce at all, while the others had one eaglet per nest. In the last days of April one of the three eaglets died in the nest; it was later picked up to investigate the cause of death. Results are not available yet. One possible cause, that unfortunately often affects small eaglets, if it is not possible to intervene in a timely manner, is trichomoniasis.

The other two eaglets fledged normally. One of the two was fitted with a GPS made available by the Life ConRaSi project. In the same area of camp 1, two Lanner Falcon nesting sites were checked periodically. Only one of the two pairs successfully fledged two juveniles.

In camp 2 the two pairs present, gave birth to three eaglets; one unfortunately died in the nest, once the carcass was recovered it was found that it had died of trichomoniasis; the other two fledged safely. The constant efforts made by the Life Choona volunteers and the Gruppo Tutela Rapaci forestalled any risk of theft or disturbance so in this case the surveillance works very well.

On May 5, 2019 LIPU volunteers helped the Grefa experts (Grupo de Rehabilitación de la Fauna Autóctona) for the ringing and the application of GPS to one of the two eaglets which, given the day, was named Napoleon. It was a unique emotion for all volunteers present that day. On May 18th, while many volunteers were busy at the LIPU National Assembly to collect the award for environmental commitment 2019, Napoleon fledged. At that moment all the fears, the anxieties and the fatigue of the two and a half months in the camp dissolved and were mixed with tears of joy.

On site A, reproduction failed due to natural causes (probably due to adverse weather conditions, considering that winter 2018-19 was locally characterized by repeated snowfalls). The two sexes alternated in the incubation of the single egg for no less than 73 days.

When it became clear that the nesting was destined to fail the camp’s main location was moved to the nearby site B, also known to inveterate birds of prey traffickers. At the same time, monitoring at site C was intensified, given that the nest occupied by eagles this year is easily accessible.

A female eagle was born on site C. On the 6th May the young eagle was ringed and provided with a satellite transmitter as part of the Life Conrasi project.

Between the 18th and the19th May, the four young Lanner falcons of site B flew off, and nearby a pair of Peregrine Falcons had two fledglings, while the young female of Bonelli’s Eagle in site C fledged on the 2nd June. In the same area of the camp a second pair of Lanner Falcons were monitored and 2 young flew in mid-May

In this season there have been no thefts of young Bonelli’s Eagles at the nest, but unfortunately several Peregrine and Lanner Falcons have been looted. The procedure with the Forestry Carabinieri is continuing: we hope for positive developments.

Thanks to the efforts of the many volunteers coming from all over Italy, the situation has improved over the years, but the battle is still long and challenging.

Thanks again to our sponsors: LIPU-UK, Stiftung Pro Artenvielfalt and EBN without whose donations these conservation results would not have been achieved. We also thank the Altura association for providing some camera- traps.

A special thanks goes to David and Shirley Lingard for their commitment in our conservation project and who are always very welcome hoping they will visit us once more.

The LIPU Team for Bonelli’s Eagle